When billionaires develop space technologies and proclaim to go and explore the space, one must be naive to think that they will do anything but exploit the space, as they do on Earth. 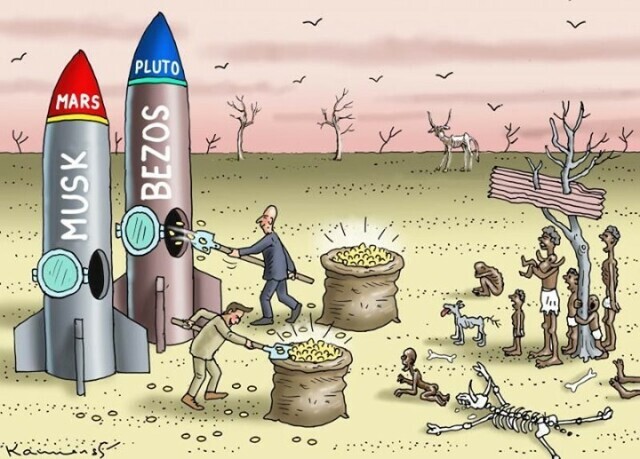 Our trade-based society is exactly like a Monopoly game, and some players get to own the entire game and do whatever they want, while proclaiming to do good things. Their thirst for playing and winning more and more, cannot go away when the game itself incentivizes them to follow such motives.

Unfortunately our lives, the Earth, and now the outer space, are all monopolized by a few players who are ruthless when it comes to them winning at any costs. The problem is that the rest of the players do not understand that this is just a game. They are trapped in their fantasy land thinking that the economy is a god-given entity, that money is real, ownership is something we need, and overall that our society is not human-made, but something we are born into and have to play by its rules.

While billionaires launch into the outer space with their rockets built on top of slaves and wasted resources, the rest of the humans should land from the fantasy world onto the Reality Planet.

We try our best, with our resources, to provide all kinds of materials for humans to be able to land on Planet Reality: news, photos, videos, documentaries, lectures, books, tools to replace their adsocial-networks and other such online nonsense that keeps their minds busy and dumb, with ones that are trade-free and relevant, and a lot lot more. See https://www.tromsite.com/tools/

Unfortunately very few react to such tools and fewer see their true value. Some people, who do indeed recognize that our society is at fault here and not individuals, are also unimpressed by such projects/tools it seems, dreaming of building utopic cities or huge projects that they never end up building. They dismiss projects like TROM, probably thinking that it is a nice project but not that relevant...

My question is: if we do no take care of brains in today's insane society, and so so online where most brains spent their time, then how are we going to even start a conversation about changing this society?

For humans to land from the Fantasy World, to the Reality Planet, they need brain enemas more than anything else right now. #tromimg
#tromimg blogs (x)

Tio, Aaron, Trom LT, Future is FOSS, Roma and Georgi like this.

Aaron and Future is FOSS reshared this.

well this fantasy will probably become reality in the near future...